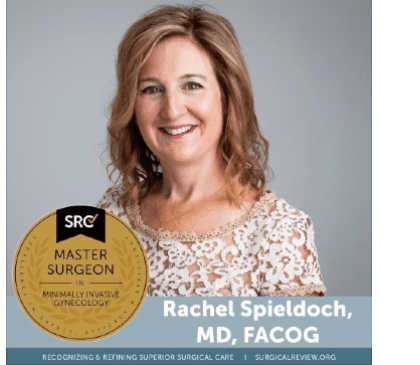 Dr. Spieldoch remains current with new advances in gynecology and continuing medical education. Dr. Spieldoch is an active member of the American Association of Gynecologic Laparoscopists, the American Medical Association, as well as the American College of Obstetrics and Gynecology. Dr. Spieldoch has published several articles within the medical sciences and has presented her research at the American College of Obstetrics and Gynecology national meeting. Additionally, she spent time practicing medicine with the Indian Health Services on an Apache reservation in Whiteriver, Arizona. Currently, she is active in the community as an educational speaker advocating minimally invasive surgical techniques.

Additionally, she is an active contributor to both the robotics community as well as the Center of Excellence for Minimally Invasive Surgery at HonorHealth. As one of the most experienced robotic surgeons for benign gynecologic disease in the Phoenix area, Dr. Spieldoch strongly believes that minimally invasive surgery offers better outcomes for patients.

In her free time, Dr. Spieldoch values quality time with her family and two boys: Luca and Ashton. She enjoys many athletic activities, including yoga, biking, skiing, and hiking. Dr. Spieldoch is an animal lover and has a soft spot for elephant wildlife, which she donates to annually. She also donates to The National Parks Conservation Association, World Wildlife Fund, and Florence Crittenton. Dr. Spieldoch has an adventurous spirit and hopes to continue traveling and exploring different cultures in the upcoming years.